Blog / We Are Gravely / Mike Burns and His Connection with Gravely

Mike Burns and His Connection with Gravely

The one hundred year anniversary of Gravely is important in Mike Burns’ eyes because knowing that a company has stood the test of time means something to customers. In his opinion, customers’ can see a product that is quality built just by looking at the history of the company. Burns has learned this over the years at his dealership, M&M Lawn and Leisure. This Minnesota-based company has been carrying Gravely equipment for nineteen years, but has been operating for twenty years this coming fall.

According to Burns, Gravely has stood out from other brands because he’s become part of a team.

“I feel like I am treated with the utmost respect as a person, where my thoughts matter. It is so easy to do business with someone that cares about you as a person,” Burns said.

He works with Gravely because, in his opinion, it supplies the best product in the market. 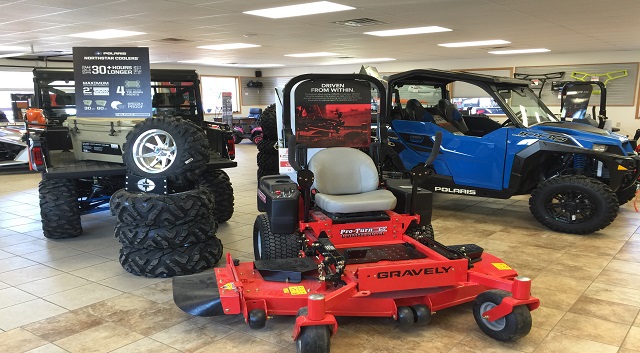 Because Burns has been associated with the company for so long, he has many memories to share. His favorite memory though, has something to do with his all-time favorite product, the 260Z Promaster:

“I was at a dealer show, and there was a company from England that was trying to sell Dan [Ariens] on a concept mower that could mow side hills. I showed them how to mow the same hill on a Promaster 260Z. You can do anything with it with not feeling like you’re going to tip it over.”

Burns’ ideal invention also includes the Promaster 260Z. In his vision, it would be the same machine, except would have three decks and have a twelve foot cutting path. In the future though, Burns sees the lawn care industry needing less labor, and more having to do with one or two guys owning three to four mowers. But for now, Burns says that the connection between Gravely and M&M Lawn and Leisure has been a thrill to watch.